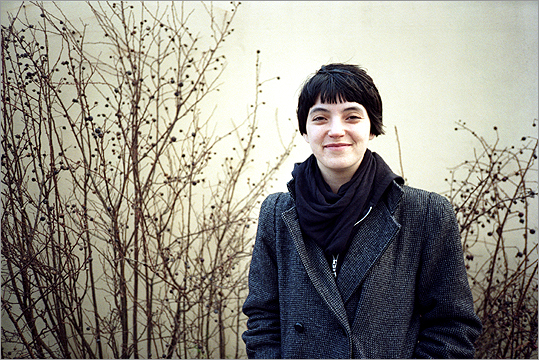 Over the past few months, Rise Records – Bristol’s biggest Independent record store – has had the likes of The Duke Spirit, Gravenhurst and Andrew Bird grace it’s non-existent stage upstairs on the shop floor. Now, after four years, it’s time for Sharon Van Etten’s return to Bristol. I walk in unprofessionally (yet very fashionably) late, mid-music and at the back of the crowd. After finishing her first song Van Etten introduces herself to the audience. She’s ever so casual and as cool as an English summer, talking to the engaged lot in a very friendly, endearing and comical way.

A few subtle jokes and remarks later, Sharon asks the audience “can you even hear me out there? …or am I just not being funny?” It is these kind of humorous interjections that provide a genuinely lovely contrast between angst and happiness. Van Etten’s well known for this kind of behaviour and she’s mentioned in the past that if she tells a few jokes and adds a bit of humour in between her songs then it helps to reassure the audience that she’s not going to slit her wrists backstage.

Her track All I Can off her most recent album Tramp (2012) brings a hush across the shop floor. Cutting a small, lonesome figure on-stage, she plays her acoustic guitar full of confidence and with a voice to match.

It’s no secret that Van Etten’s been through a tough time growing up, which, for lovers of her music, is fantastic! It’s these moments of heartbreak, love-loss, despair and darker times that have provided the material for the Brooklyn based songstress to write such emotionally fuelled songs. Turning heartbreaking moments of her past into the most heartbreaking/heart-warming of songs in the present.

I met Sharon afterwards and we spoke more about comedy than music. Sharon mentioned that if she didn’t take the music route then she would like to give the comedy a go, for a laugh. I wanted to leave her with a joke, ideally one about a boat that she could tell at her evening gig at the Thekla. My mind went blank and I didn’t get to tell her any of my boat related jokes which did, in fact, give me that sinking feeling inside…

You have Successfully Subscribed!

TUNGZ – WHY DO ANYTHING? // EP REVIEW

Bristol in Stereo is currently on hiatus due to COVID-19.

See you on the other side.
×